Margot McNally is an elementary school music teacher who loves the sound of her pupils raising their voices in song. When she's off duty, however, music to her ears is the silence of her 18-year-old mare not coughing. The British Columbia resident started riding two years ago, essentially as a beginner after a 40-year break from horses. First, she leased the Thoroughbred/Hanoverian mare from her coach, then fulfilled a childhood dream of owning her own horse by purchasing Runic a year ago. Margot knew of Runic's history of an occasional cough that had rarely interfered with her well-being or activity.

That sporadic cough came and went with the seasons and different batches of hay. As Margot spent time with the mare as her owner, however, she witnessed things get worse in the last year. Initially the problem arose only during exercise and was eased to some extent by soaking the mare's hay. Then it progressed to coughing even while at rest. By December of 2019, "It became a daily thing that was painful to listen to," Margot recalls.

Runic's veterinarian diagnosed Equine Asthma, which affects a surprisingly high percentage of active sporthorses -- often with no obvious symptoms. The vet recommended the bronchodilator medication, Respipulmin, to ease Runic's breathing. That helped, but at £15 a day for the rest of Runic's life, the cost would have added nearly £5,500 to her annual care.

Runic had a break from work while she was kept comfortable on the preliminary medication and Margot went to work researching equine respiratory issues and treatments. That led her to Haygain hay steamers.

Developed 11 years ago in conjunction with The Royal Agricultural University in the U.K., Haygain high-temperature steaming rids up to 99% of the dust, mold, fungi and bacteria found in even top-quality hay. These are the biggest contributors to all conditions on the Equine Asthma Spectrum. The most common of those conditions, Inflammatory Airway Disease, affects over 80% of all horses. Haygain has been proven to reduce by 65% the risk of contracting IAD and has years of research and anecdotal evidence of helping manage conditions at every point on the spectrum.

Within 10 days of starting on steamed hay, she was able to go completely off her medications and go back to work."

Margot decided that an HG One hay steamer would be Runic's Christmas present. "Within 10 days of starting on steamed hay, she was able to go completely off her medications and go back to work." While a hay steamer is a significant investment for any horse owner, its cost is about one-fifth of what Runic's medication would have cost -- just for one year. Haygain hay steamers are well-made, durable machines that last for many years, stretching the savings further. Budget and her horse's health are equally important and Haygain is enabling Margot to prioritize both.

Riding on the flat and advancing her horsemanship and bond with Runic is her daily reward and ideal therapy, she laughs. "It's better therapy than any counselor could give!"

Runic lives "six driveways down" from Margot's home, at the Westbrooke Equestrian Center in Pt. Alberni, British Columbia. Margot steams Runic's hay in a shed at her home. She tosses the net full of freshly steamed hay into a Rubbermaid container in the back of her truck. "By the time I get to the barn, it's the perfect temperature for her." 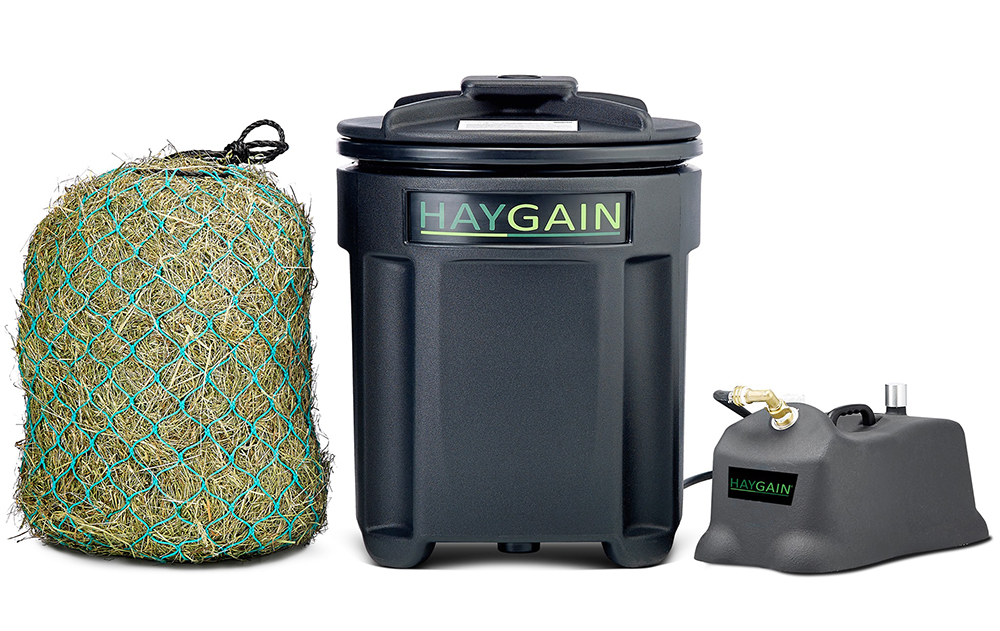 I am 100% a believer in Haygain and Runic will be on steamed hay for the rest of her life!"

The big mare eats the steamed hay with gusto and her stablemates, and their owners love the smell. In addition to being a better method for improving equine respiratory health, steaming beats soaking hay in the hassle department. "I soaked her hay through last spring, and it was such a mess," Margot reports. "I'd wondered how the heck I could keep soaking hay through the winter. It's really cold here and sometimes we don't have running water outside." When temperatures drop below freezing, she brings the steamer's boiler unit inside and ensures that the thermal chest and connecting hose were properly drained to prevent leftover water from freezing.

While Runic provides Margot a cherished, unofficial form of therapy, Margot's gift of steamed hay provides her mare a therapy with extensive science proving its effectiveness. Having her horse at ease and back in work is all the evidence Margot needs, however. "I am 100% a believer in Haygain and Runic will be on steamed hay for the rest of her life!"

How can Haygain help your horse?

Haygain is committed to improving the respiratory and musculoskeletal health of horses through research and innovation. Numerous scientific trials have shown that Haygain's high-temperature steaming eliminates 99% of dust, mold, bacteria and fungi in hay; effectively removing the health threat from respirable dust.

Developed by riders, for riders, we understand the importance of clean forage and a healthy stable environment for maintaining the overall well-being of the horse. Our hay steamers are recommended by many of the world’s leading riders, trainers and equine veterinarians. Find out more by clicking on one of the links below.

What veterinarians are saying Becky James BSc MScDirector of Technical Sales, Haygain It is... The Ammonia smell in the stable: Is it a health threat? Or an innocent, if unpleasant, part of life with horses?

Catch up with event rider Chelsea Pearce after a busy season Event rider Arabella Clegg talks to Zimbabwean eventer Camilla Kruger to find out how this years event season has been.