Professional dressage rider Amy Howard has nothing but high praise for the ComfortStall she has in her yard and her horse Floris loves it too! 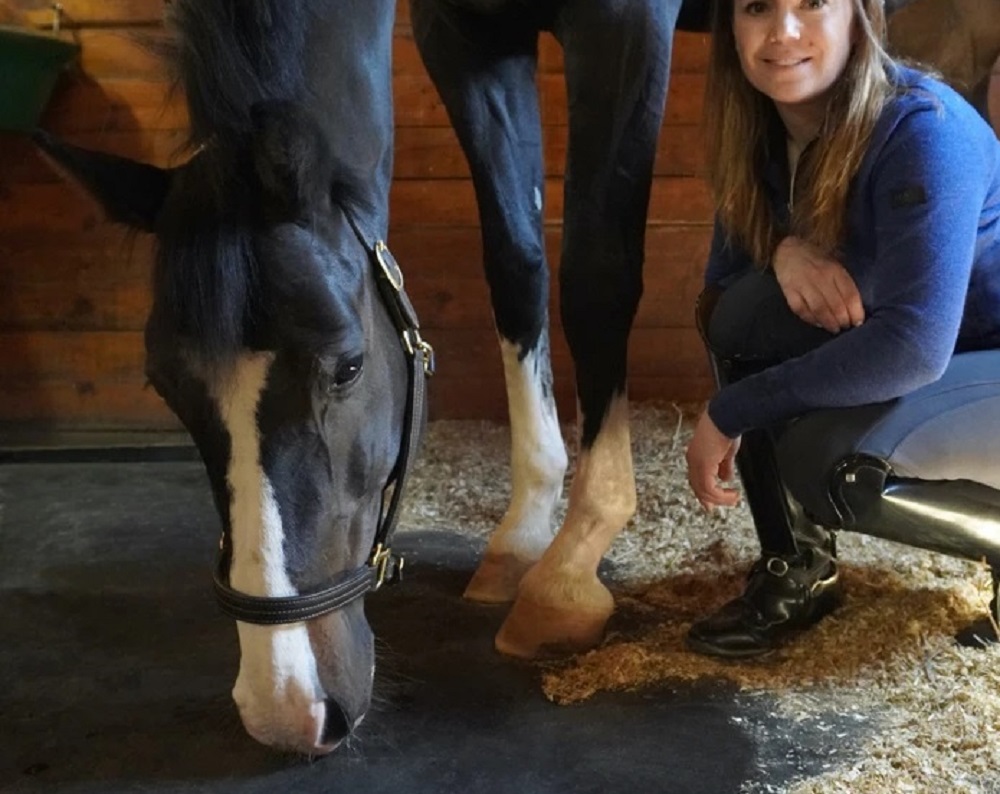 Like a lot of yard owners, FEI dressage rider Amy Howard chose thick rubber stall mats for her private training barn, located in Hunterdon County, New Jersey. They seemed the best option until she installed ComfortStall Sealed Orthopedic Flooring. "There's no comparison," she says. "This feels like the flooring in a gym: it springs up to meet you. The rubber stall mats feel like you could be standing on concrete. They feel hard and dead.

"The ComfortStall is stable, but it absorbs your concussion," she continues. "If you have ridden on the best kind of arena surface, where it absorbs the concussion then returns energy, that's what it feels like."

The first horse to try it, rising Third & Fourth Level dressage star, Floris, took to it quickly. "It was interesting to watch. Floris seems calmer in his stable on this surface. He seems to be thinking about where his feet are and balancing himself evenly on all fours."

As an athlete herself, Amy understands the therapeutic benefits of constant, tiny muscle movements for joint and muscle recovery and maintenance. In physical therapy--for humans and horses-- it's called "proprioception" and is considered critical to the healing process, whether from the wear and tear of regular daily workouts or when rehabbing from an injury. Watching Floris on ComfortStall, the concept of proprioception and its benefits came to life for Amy. Her Equine Science degree and British Horse Society externship guide an emphasis on holistic horsekeeping in her Crosswinds Farm training program.

Most stabled horses spend much of their day standing in their stable. "ComfortStall has to be more comfortable on their joints," Amy observes. Floris is not just standing, however. Judging from the amount of shavings on his blanket, he's spending plenty of time lying down. Encouraging rest and deep sleep are well-established ComfortStall benefits. Many owners report their horses napping more often throughout the day on this unique surface and displaying the effects of a restful night's sleep.

The cushioned surface is also great for eliminating hock sores and other bumps and bruises that can occur when trying to stand up on traditional stall flooring.

Crosswinds Farm's staff members are also fans of the new flooring. "They love how easy it is to clean," Amy relays. With mats, ample shavings or other bedding is needed to provide cushion and a comfortable place to rest. Proprietary orthopedic foam provides that in ComfortStall, reducing bedding needs to only that required to absorb urine.

A one-piece top cover of durable rubber lays over the foam layer and is sealed to the stable walls with HDPE anchor strips. That prevents urine and other fluids from seeping down and accumulating on the stall floor and emitting unhealthy ammonia and unpleasant odors as happens with traditional stall mats.

Even though the mats that preceded ComfortStall were of top quality, relatively new and tightly fit to eliminate gaps, Amy saw first-hand the gunky underworld beneath them during the ComfortStall prep. "It's amazing what was there and how much can grow under there," she observes. "It's great to know that won't happen again because of the seal to the wall. It's great to know nothing is getting under there."

The seal also makes it easy to clean and disinfect the flooring. Cornell University Veterinary Hospital has used ComfortStall with post-surgery patients for over 10 years. In a normal stable environment, easy cleaning is a reassuring attribute, especially during this time of extra concern about contagions.

Amy is grateful to her husband, David Giannetto, whose construction savvy made easy work of their DIY installation. "It's not that complicated," she relays. "The foam pads are light and easy to cut." The IronClad TopCover is not light, Amy stresses. "That took two big guys to drag it in and hurl it into the stall." Its weight correlates to durability that comes from layers of tightly woven polyester/nylon mesh and dense, vulcanized, latex-free rubber.

Precise stall measurements are critical, Amy adds. At Crosswinds, they prepped the stable by leveling the stone dust base, and that was the most labor-intensive part of the process. One week into using ComfortStall, Amy is thrilled with the stable upgrade. Clients and friends are, too: "I got to walk on it before Floris moved in: I'd like one in my kitchen," one posted on Amy's Facebook page. Another likened it to a "Four Seasons hotel bed for horses!"

Most importantly, Floris likes it.

What are the benefits of ComfortStall?