Twenty-year-old Georgia Bartlett had a head start with horses in the form of her grandmother and her parents being keen on them, too. Her solid education and winning ascent in the Pony Club ranks built a firm foundation of horsemanship that she is now demonstrating at the upper levels of eventing. Georgia is holding her own against riders whose resumes she hopes to emulate.

Since earning two European Junior Team silver medals, Georgia logged her most recent milestone at the Blenheim Palace International Horse Trials in September. It was the first CCI4*-L for both Georgia and her partner of the last five years, Spano De Nazca, aka “Nono.” He was her first horse after graduating the pony divisions and their remarkable rise together continues.

“It was very special just to be at Blenheim Palace and we went without huge expectations,” Georgia explains of the world-renowned competition not far from her home and stable in Berkshire. They finished 11th -- only a show jumping time fault tick over their dressage score, and just behind Tokyo gold team members Tom McEwen and Oliver Townend. 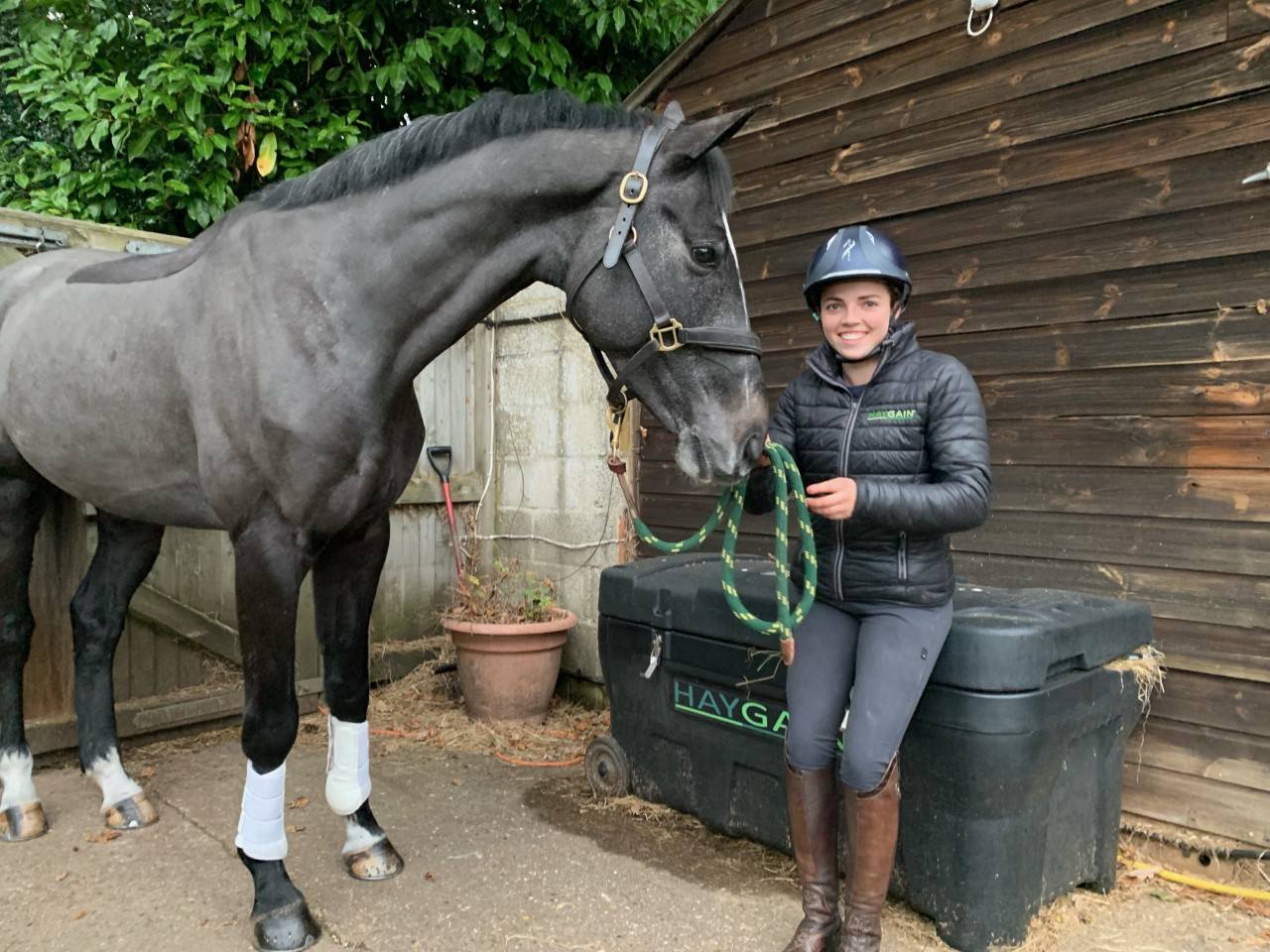 “It was something just to take it all in and even more special that we performed so well.” All the more so because Nono was only recently back to full work after suffering a minor injury early in the year. That limited their opportunities to prep for one of the most rigorous events in the world. The young professional counted on careful conditioning and consistent routines for her small yet mighty Anglo Arab.

Regarding consistent routines, Georgia is grateful to Haygain’s Jemma Woolford for bringing a portable HG One Hay Steamer out to Blenheim for Nono. Georgia began steaming hay for all her horses two years ago. It wasn’t in response to any specific health issues with her horses. “It was more of a preventative measure,” she explains.

“We used to soak all the hay, then we realized that wasn’t entirely good for them.” Indeed, soaking hay leaches nutrients while potentially increasing the bacterial content. Further, many horses don’t like the taste or texture and the process is a laborious, messy bother for Georgia and her team.

“I didn’t want to give Nono dry hay because it got so dusty,” Georgia explains. “At 15, Nono is getting older and when I learned about Haygain Hay Steaming I thought it would be a good preventative measure.”

“At or near the top levels of eventing, the horse is galloping for almost 10 minutes,” she continues. “It’s really important that they are healthy in their respiratory system so that is not holding them back.”

Perhaps it’s Georgia’s horsemanship pedigree that explains her wise-beyond-years horse sense regarding equine respiratory health. Although respiratory problems often present only very subtle symptoms – and sometimes no symptoms at all -- compromised respiratory function is the first thing many vets consider when an otherwise sound horse is off their game performance-wise.

Georgia jumped fully into Haygain Hay Steaming with the biggest model, the full-bale HG 2000. It’s great because she can feed several horses at home, but it’s too big to travel with conveniently. Hence the outreach to Haygain in its Lambourn headquarters. “It was really great to keep everything the same throughout the competition rather than have to switch him to dry hay.”

Swimming was another key to Nono’s peak condition at Blenheim. The routine enabled him to dive back into their planned conditioning work as the CCI4*-L debut neared.

It worked: “Even at the end of the course, he was still taking me and feeling really good at the finish,” Georgia says happily.

Along with finishing right behind two Team GBR gold medalists, Georgia displays a veteran’s wisdom in knowing that small details in care and preparation lead to big results. “Every little difference we can make for our horses is what the difference in placings comes down to at the end of the day.” There are no short cuts, no magic treatments. Just sound horsemanship, day in and day out.

Nono is the clear star of Georgia’s string at Georgia Bartlett Eventing, but the young professional has four younger horses – from 4- to 7-year-olds – coming nicely up the ranks. They all get Haygain for the same reason Nono does: They’re healthy and Georgia wants them to stay that way. “Plus, if you keep it right from the start, I hope to prevent any issues farther down the line. I want their breathing to be the best from the start.”

The U25 Championships at Braham are in Georgia’s sights for next year as well as a return to the Blenheim CCI4*-L, with the hope of earning 5* qualification. Given all she’s already accomplished at only 20, Georgia is adding an impressive chapter to her family’s legacy with sport horses.