Not Gone With the Wind

Steamed hay gives Charly Edwards' top horse a new start. Signs of Brass Monkey's issue did emerge in the form of coughing when dust from nearby hay harvesting blew in or a batch of dusty bedding arrived. 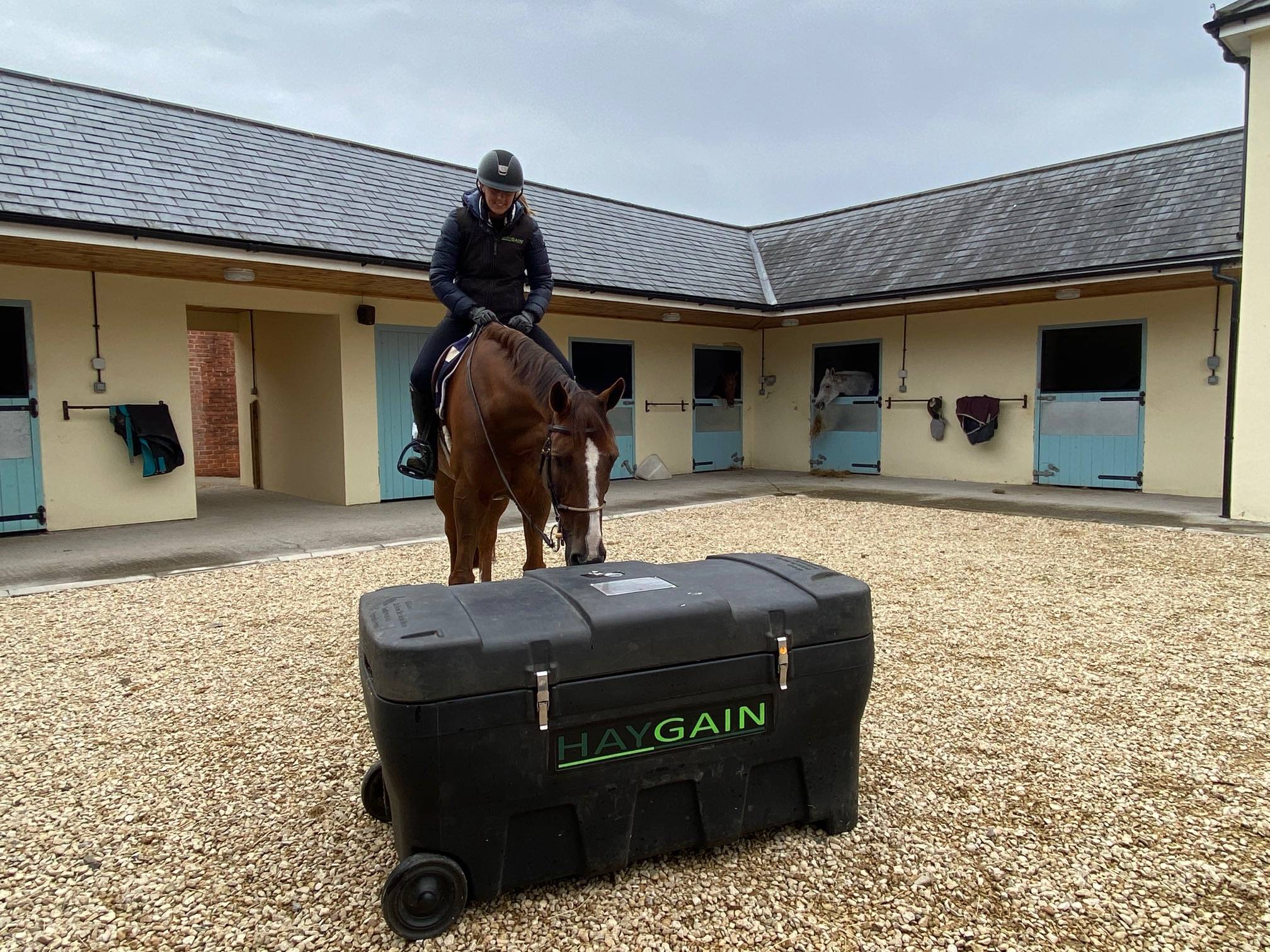 Charly Edward's top horse Brass Monkey has faced some major challenges. Early this year, he sustained a fractured knee along with troubles stemming from the common and often harmless equine herpesvirus. Yet, in his two years as a show jumper, he's never been held back by the one challenge that is responsible for the former eventing prospect coming Charly's way: "wind problems."

"The reason we were able to get him is that we were told he had a wind problem and would not be able to gallop around the high-level eventing tracks," reports Charly, whose Edwards Equestrian training and sales program is based in Hampshire. She had been contemplating a Haygain Hay Steamer for some time and bringing Brass Monkey into the yard was the nudge needed. "It's one of those purchases that you think about for a long time," Charly acknowledges. "And it was because of him that we finally got it."

The source of the "wind problem" was never diagnosed. In all horses, the respiratory system is very delicate. Sometimes it's a conformation issue in the upper airway that restricts the horse's capacity for the air intake required in peak performance. More often it's tiny, inhalable particles found in the horse keeping environment, especially in hay -- even in hay of top nutrient quality.

That's where Haygain's high-temperature hay steaming comes in. Developed in 2009 in conjunction with the Royal Agricultural University in Cirencester, the patented process reduces up to 99% of the dust, mold, fungi, bacteria and other allergens in hay. Feeding steamed hay is a widely accepted means of protecting horses' respiratory health and preserving respiratory function in horses with conditions on the Equine Asthma Spectrum or conformational issues that exacerbate the risks of airway irritation and inflammation.

Signs of Brass Monkey's issue did emerge in the form of coughing when dust from nearby hay harvesting blew in or a batch of dusty bedding arrived. With steamed hay, however, "We saw a dramatic improvement in his well-being," Charly relays. "We now literally don't feed any horse unsteamed hay."

Young horses are a big part of Charly's program and she sees steamed hay as of special benefit to those transitioning from outdoor living to spending much of the day in the stable. "We had one mare who was really stressed when she first started living inside. We had to take her to the vet, who determined that she had a lot of dirt in her lungs."

In addition to transferring oxygen to the bloodstream to fuel muscle and other cell performance, lungs function as an air filtration system for the horse. Unfortunately, the lungs can't be cleaned as easily as filters in household air cleaners. That's why reducing dirt and airborne irritants is so important. "We saw a huge difference in the mare after a period of getting steamed hay," Charly explains.

Improved appetites and hay consumption are more benefits Charly credits to the tasty forage coming out of Edwards Equestrian's HG2000 steamer, Haygain's largest model. "That alone will save you money in the long term." Even with a horse head count fluctuating between eight and 20 horses, steaming has been easy to incorporate into the routine, she adds.

Brass Monkey's recovery from the issues that really did hold him back came just in time to strut his stuff at early September's 1.35M Douglas Bunn Challenge at the famous All England Jumping Course at Hickstead. It was a dream come true to ride on the Hickstead Derby field, Charly says. Having a terrific trip with Charly made it even more so.

As her top horse, Brass Monkey fits Charly's long-term goal of representing Team GBR in Nations Cup competition. The Valencia Tour in Spain and the Hickstead Speed Derby are goals for next year en route to that. Charly is also shopping for more horses to build her string, along with bringing along the youngsters. Whatever their stage of development, all Edwards Equestrian steeds are assured of Haygain Steamed Hay. Clean Hay Is a Kentucky Consensus